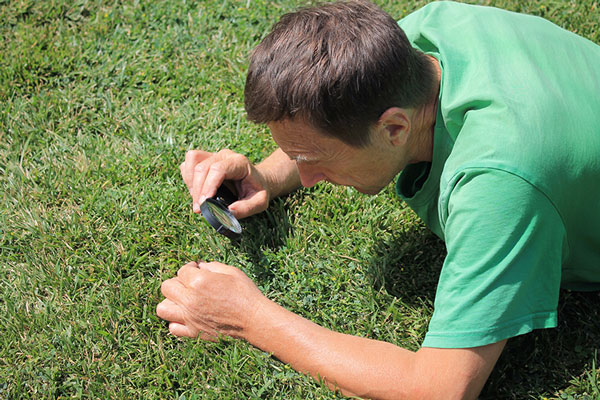 How to identify and treat 5 Common Lawn Diseases

When a disease attacks your lawn grasses, it can become tricky to manage it, especially when you don't know what's causing it. Lawns diseases can occur at any time of the year, usually after an extended period of humidity and heat. Typically, most lawn diseases are caused by different species of fungi, and they can wreak havoc if proper measures are not undertaken.

Often, an infected lawn will show signs of discoloration, or it will be patchy or have some dead patches. The causative agents can hide in the soil or float by the air waiting for the right conditions for them to multiply. However, a lawn will remain disease-free for the most part as long as it is well maintained. This will include various prevention measures before symptom starts to show up and the appropriate treatment if the disease has already taken hold.

Brown patch is the most common disease that affects almost all cool-season lawn grasses. It is caused by different strains of the Rhizoctonia solani fungus, and it is especially harmful to tall fescue, ryegrass, and Kentucky bluegrass. The disease appears as circular and somewhat irregular patches, and it is most likely to occur when night-time temperatures are above 68° F in early summer.

The brown patches are usually easy to identify, but the disease can sneak into your lawn, and by the time you realize, it will have spread significantly. The patches appear either dead or dry with the outside of the spot appearing to be somewhat darker than the inside. Overwatering and poor soil drainage can also contribute to the disease's severity.

Fortunately, this disease can be controlled if detected early. Your control plan should aim at reducing the severity of the current condition and a recurrent in the next season. This includes using fungicides that offer up to 4 weeks of protection while also controlling other conditions that may occur around the same time.

However, fungicides can prove highly ineffective when the disease has already progressed. They are, therefore, used as a preventive intervention in late spring and throughout summer.

Also, mowing will enhance air circulation and promote proper drainage, thus allowing your lawn to dry. While mowing, start with the unaffected areas first before proceeding to the infected part later to avoid infecting the entire lawn. Also, you should strictly adhere to your regular fertilizer schedule to avoid adding excessive or less nitrogen to your lawn.

Snow mold is also a fungal disease that appears as the snow melts in early summer, making the grass have a mattered appearance. Usually, the infected part is slow to green up. This disease appears in two forms:

Generally, snow mold results when there is snow cover that is not completely frozen, usually in early spring. It can also occur on leaves that have not been cleaned for some time or on tall grasses that should have mowed before winter. Using too much nitrogen in fall and poor drainage also set the stage for the disease to strike in.

Applying fungicides will help to keep the disease at bay as opposed to waiting to control the disease once the symptoms appear. Multiple applications of fungicides are more effective as conducive conditions persist, and they will have the longest residual of control. Also, you should improve water drainage and soil aeration and avoid excess nitrogen, especially in fall.

Dethatch your lawn regularly and ensure to rake leaves in fall to promote drying. Also, ensure that large piles of snow are distributed to encourage rapid melting.

Red thread thrives in humid, cool conditions and usually, it appears as a red/pink thread or webbing on the lawn. Red thread shows up on grass grown in soil with a low level of nitrogen and under fertilized soils. Also, it is more common in places that receive heavy rainfalls and limited sunlight. This disease is not as prolific as others stated here; instead, it serves as an indicator that you need to fertilize your grass.

Typically, it affects cool-season grasses like bermudagrass, red fescue, bluegrasses, and perennial ryegrass. To prevent infection, ensure that you fertilize your lawn frequently while keeping up with your regular lawn care which includes regular dethatching and aeration. Also, ensure that you provide your lawn with enough nitrogen to prevent a recurrence.

Summer patch tends to appear in late summer when daytime temperatures rise above 90 degrees. Straw patches of wilted grass characterize it, and it is caused by Magnaporthe poae. This fungus infects the roots and interferes with their ability to take water and nutrients.

The hot and humid weather provides a favorable condition for the disease to thrive. It does the damage in late spring, and early summer but the symptoms are expressed fully in late summer when the lawn is stress. It is highly destructive if left untreated and control options are much limited once the disease has already progressed.

Preventive options, fortunately, are available to repress and eliminate summer patch damage on the lawn. Fungicides application should be done in late spring when the fungus is active and before the soil temperatures reach 65 F.

Once the disease is visible frequent irrigation might be helpful as chemical options may be ineffective at this stage. You should, however, avoid excessive watering and also you should aerate the soil to promote air circulation.

Powdery mildew appears like white dust, as though dusted with flour, mostly on leaf blades. It caused by Erysiphe graminis which thrives in shady areas and more frequently in cool, humid climates. As such, it is more common in spring and fall. Also, it is common on cool-season grasses, especially Kentucky bluegrass.

Powdery mildew can cause thinning in your lawn and to manage it, you'll need to increase the amount of sunlight in the affected areas by pruning trees and shrubs. Fungicides may also help prevent the growth of Erysiphe graminis when the outbreak is not severe. However, the best solution is to replace the grasses with shade-tolerant varieties that do not support mildew.

Your best bet against lawn diseases is a good lawn care routine. The first step is understanding the specific type of grass in your lawn and the nature of the soil. Different variations will require different interventions, thus enabling you to make better decisions. You'll also need to understand your growing environment so that you can be able to create an appropriate fertilizer application and mowing schedule. Proper understanding of the tools needed to grow and care a lawn is also very very important. Remember to undertake the necessary preventive measures to prevent a recurrent in the next season.