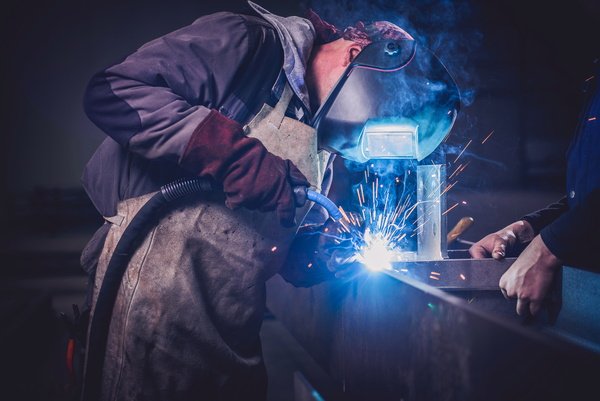 What is a plasma cutter?

A plasma cutter is a machine that utilizes a torch in the form of an accelerated jet of hot plasma to cut through electrically conductive materials. The plasma is formed when a gas is passed through a constricted opening (torch) at a very high speed forming an electric arc on the level below.

The plasma cutter then utilizes the electric arc and gas to create precise, clean, and professional cuts. The gas can be Argon, Nitrogen, Oxygen, or shop air, depending on the metal being cut. Most entry-level plasma cutters use shop air simply fed via an air compressor. High precision plasma cutters such as those found in complex fabrication shops need pressurized gas such as Argon or a mixture of gases.

The materials that can be cut with a plasma cutter include aluminum, steel, stainless steel, copper, brass, among other conductive metals. Due to high speed and very hot localized "cone", a plasma cutter is used to cut sheet metal with angled or curved shapes, and it is widely used in large-scale CNC applications and small DIY shops.

When using MIG welder or any other welder, the inside of the metal remains hot, but when using plasma, the inside of the metal remains cool. The plasma cutter is also almost ten times faster than MIG welder, and it is effective in cutting thin and thick metals alike. A hand-held plasma cutter can be used to cut up to a 1.5-inch thick steel plate. On the other hand, stronger computer-controlled plasma torches can cut up to 6 inches making them exceptionally useful for cutting thick steel plates.

As discussed above, the materials cut by a plasma cutter require more voltage supply for cutting without dross cuts. However, in an event the cut speed slows off, the procedure can lead to deposition of thick, porous debris resulting in a tainted cut edge, but it easy to remove.

Simply put, a MIG welder is used to create an electrical arc between a consumable electrode and the work piece metal (s), which heats the metals, causing them to melt and join, thus creating the weld. Alongside the wire electrode, MIG welder also uses a shielding gas, which is feed through the welding gun to protect the process from atmospheric contaminants.

The effectiveness of MIG welder is dependent on the feed rate and choosing the right gas. If the two are not set correctly, the metals being welded will not melt. MIG welder produces less heat than plasma cutter, which means less metal bending. This makes it perfect for welding thin metals such as autobody work and slender sheet metal.

The MIG welder is widely used by hobbyists, farmers, motor enthusiasts, or artists to make almost every type of fabrication and repair/maintenance jobs. It can weld material from gauge 24 up to ½-inch thick, and most people find it easy to learn by simply following some essential tips.

Can I use MIG welder as Plasma Cutter?

Plasma cutters have gained popularity over the past years, and they have become a tool of choice for cutting various metals. They are clean, quick, and easy to operate than the traditional oxyacetylene torches. However, if your work does not involve ton of cuts and you don't want to invest in a plasma cutter, you can convert your MIG welder to produce cuts similar to those of a plasma cutter. For this you'll need;

Now, on the brass plumbing valve, attach a fast-releasing compressor hose coupling for your air compressor. You'll then need to set the amperage of your welder up to 25-50 amps. This will generate a very hot arc, leading to excessive oxidation capable of blowing through metal plate up to one inch thick like in a plasma cutter.

This experiment requires a bit of practice for optimal performance. You'll also need to take caution with the air stream to avoid blowing some towards you or others. You'll also need to wear a welding helmet for eye and face protection. Also, when working with a plasma cutter, ensure to work in a well-ventilated or open space since it produces hazardous fumes. Remember, the advantage of plasma cutters is that they do not catch fire upon heating up, and the metal does not get hot while cutting. Also, cutters are more productive than MIG welders due to their speed.