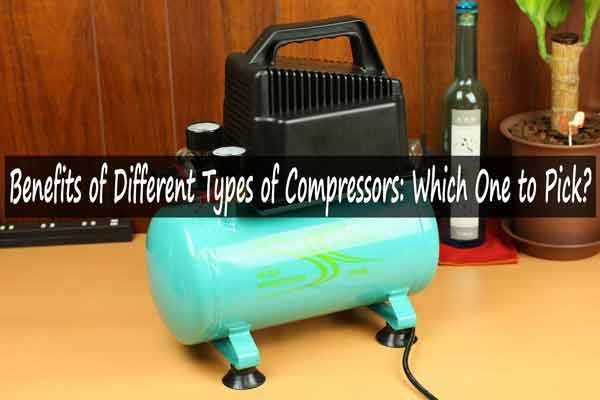 Benefits of Different Types of Compressors: Which One to Pick?

Getting the right type of air compressor and the one that suits your needs is very important as in the long run it will help you save on time and money. However, it can get pretty confusing to choose from the many types and models available in the market today.

The debate of which compressor is right for you all comes down to what you want to use it for. This includes its scope of applications, the amount of air (pressure) that is required, and the flow rate of each compressor. Read our details guideline on how does air compressor work.

In addition, the ease of operation, level of maintenance, installation process the cost and operating costs plays a big role in choosing one model over the other.

In this article, we shall discuss the benefits and typical uses of the common types to help you establish which one best suit your needs.

Features and Benefits of Various Types of Air Compressors

Knowing the similarities and differences between different models will help you establish the benefits that come with each hence you will be able to select the model that best suits you. Here are some of the differences in terms of performance.

Piston or reciprocating air compressors makes use of one or more pistons/cylinders to compress air. This pistons move up and down inside the air tank allowing air in for compression which is finally discharged to the tool that is being powered.

You will find this compressor being used mainly in: garages, small businesses, workshops, and in small construction work like nailers.

The rotary screw compressor, on the other hand, uses a pair of two screws (rotors) that move in opposite direction inside the cylinder to compress air. Atmospheric air is trapped between the two screws and that’s how it is compressed.

Rotary screw compressors are large and are ideal for powering large industrial and commercial machines.

Rotary vane compressors employ the same mechanism as rotary screw only that the vane version consists of blades that are aligned radially all around the rotor. As the rotor turns, the blades rotate while keeping a close contact with the cylinder wall, creating a series of increasing and reducing volumes.

This is an iconic compressor in hydrogen refueling stations and other hydrogen-based applications.

The Rolling piston features a piston in form of a roller whose shaft rotates on its own axis matching with the center line of the cylinder. This rotation causes the suction and compression of atmospheric air by reducing the volume of the cylinder.

These compressors have wide application in air conditioners and applications whose cooling capacities do not exceed 15 kW.

​​​​A scroll compressor features two spiral-shaped vanes (scrolls) whereby one is fixed and the other one moves on its own axis trapping air between them facilitating compression.

You will find these compressors mainly used to power air conditioners, vacuum pump and superchargers for various automobile applications.

Diaphragm compressor is a version of reciprocating compressor. Compression of air is facilitated by the forward and backward movement of the crankshaft which brings about the movement of a special membrane inside the compression box.

Centrifugal compressor is a special kind of the rotary compressor which uses an impeller (rotating disk) to suck air into the cylinder, onto a special duck where the air is converted into pressure energy.

Diagonal or mixed-flow compressors employ similar working mechanism as centrifugal compressors, only that the flow of air occurs diagonally to the plane of rotation.

The diagonal or mixed-flow compressors have been tested and used to start aero engines worldwide.

Axial-flow compressors use fan-shaped airfoils which rotate to compress air, which flow parallel to the axis of rotation i.e. axially hence the name axial flow.

So Which One Do You Pick?

It all comes down to the nature of your needs when comparing and choosing the best compressor for any application. It is all about the capacity expected, the required pressure, scope of work (tools needed), maintenance level as well the tagged price.

We hope that this article has been useful and that you have fairly a good idea of the kind of compressor that is best for you.