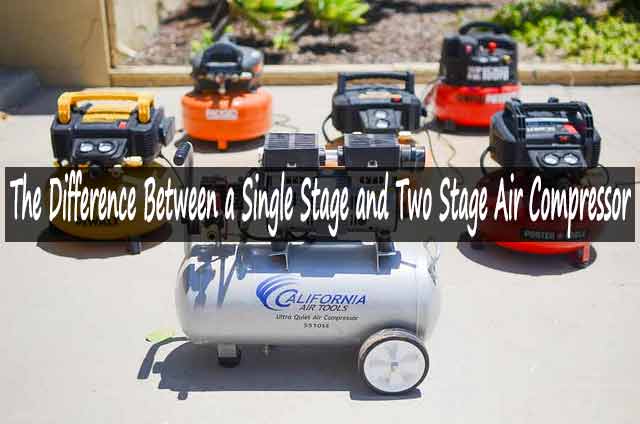 The Difference Between a Single Stage and Two Stage Air Compressor

An air compressor is an indispensable tool in any workshop providing a wide range of applications. Air compressors come in different types, shapes, and sizes and choosing the one type over the other can be sometimes challenging.

One of the most common types is the reciprocating air compressors. Also known as piston compressors, they are categorized on the basis of CFM output, tank size, horsepower among other factors.

At the end of this article, you will have a clear picture of the differences between single stage and two stage air compressors as well as applications for each type.

Differences between a Single Stage and Two Stage Air Compressor

Let’s see how each work;

The air is sucked in into the compression cylinder through the filter by the action of both the inlet valves and the movement of pistons to the downside. Once enough air is drawn to the cylinder, the inlet valves closes which signals the crankshaft to rotate, pushing the pistons upward which compresses the air while at the same time pushing it to the exit valves. The pressurized air (about 120 psi) is then discharged into the storage tank until when needed.

The process of sucking and compressing air in a two stage air compressor is similar to that of a single stage, but in the former compressor, the compressed air goes through a second phase of compression. This means that the compressed air isn’t discharged to a storage tank after the first phase of compression. It is instead subjected to yet another compression of about 175 psi by a small piston in the second cylinder. With this, the air is double pressurized which translate into double energy. Just as in single stage, it is then discharged into the storage tank for use in various applications.

Another notable difference between the two is;

The Number and Shape of the Pumps (Cylinders)

Both the single stage and two stage compressors have two cylinders which is important for the purposes of balancing the air. The pistons that compress the air are located in these cylinders. In the single stage compressor, the pistons have the same dimensions and as such the cylinders have uniform physical dimensions. The two stage compressor, on the other hand, has one large piston (low pressure) for first compression and a small piston (high pressure) for the second compression. This makes one cylinder to appear big than the other.

In addition, in the two stage compressors, the two cylinders are joined by what appears to be a cooling tube which helps to lower the temperature of the compressed air for the second compression.

Ideal Scenarios for Each Type

Which type is ideal for you will on the scope of work at hand.  The single stage compressor is ideal for most handheld tools that require about 100-120 psi. It is the best choice for workshops and auto shops which require minimal power to run various pneumatic machinery for trimming, framing, nailing among other small tasks.

Two stage compressors, on the other hand, deliver more CFM as compared to single-stage compressors which makes them ideal for factories and construction crews that requires large scale and continuous air supply. They are costly than their single stage counterparts which is why they are not ideal for private uses.

Powered tools are part and parcel of craftspeople and other work crew in general irrespective of the nature of operation. For a regular woodworker, a single stage compressor will come in handy helping you deliver your work faster and more efficiently.

For heavy duty operations, the two stage compressors will be the most ideal choice thanks to their ability to deliver more CFM.